How and Why to Use an Entity with Your Broker-Dealer 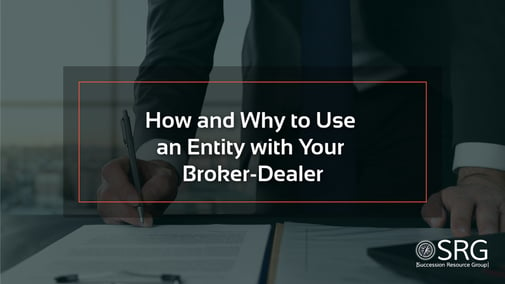 Using an Entity with a Broker Dealer

Almost half of advisors affiliated with a broker-dealer use an LLC or S-Corp., but almost none are set up appropriately for the IRS.

In this session, we will start with why every advisor should think about setting up an entity to operate their business, what are the most important steps and which are most often missed (and what the implications are), as well the toughest part – how to set up and use the entity correctly to avoid future issues and minimize audit risk.

Whether you are thinking about setting up an entity or already have one, attendees will learn how to do it right or confirm they are part of the minority doing everything correctly!

David Grau Jr., MBA
David Grau Jr. is the founder and CEO of Succession Resource Group, a succession and M&A consulting company for advisors. Prior to launching SRG, David was the leading M&A consultant for a well-known succession planning firm to advisors where he led and developed numerous programs for RIAs. David is a published author and accomplished speaker, and has been interviewed and cited in dozens of publications over the last decade.

Nicole Frey, CFP®
Nicole is the Senior Project Coordinator at Succession Resource Group. Until her relocation to Oregon in 2014, Nicole worked as a senior legal assistant for a law firm in Washington for seven years where she managed multiple cases, communicated with clients/courts/government agencies, as well as drafted pleadings and legal notices. Nicole brings extensive experience in contract preparation and project coordination to our SRG clients.