(PORTLAND, Ore. — Feb. 20, 2017) Succession Resource Group, Inc. (SRG) published its third annual review of advisor acquisition activity, recapping 2016 data highlights and trends, drawing on more than $46 million dollars in third-party aggregate advisor sales prices ($5.6 billion in aggregate AUM transferred). SRG presented its findings to a live audience in its presentation titled, “2016 Financial Advisor Merger & Acquisition Annual Review” providing the status of the macro environment for deals completed in 2016 (excluding data from internal succession plans) for independent Registered Investment Advisors and Registered Representatives. Based on SRG’s data, the average sale price for financial services firms held steady in 2016, with no change in the year-over-year growth in value paid per dollar of recurring revenue (referred to as the recurring gross revenue multiple), and a slight decline in the year-over-year growth in value paid per dollar of commission revenue (referred to as a non-recurring gross revenue multiple).

Over the last four years, the average multiple of gross revenue and multiple of earnings (common pricing benchmarks for financial service practices) paid for a financial services practice has steadily increased, with the recurring multiple reaching an all-time high in 2015 with an average multiple of gross recurring revenue of 2.60. Uncertainty regarding the DOL Fiduciary Rule’s impact on the industry, and the worsening industry demographics, with the average advisor in their mid-50s, caused the prediction of more advisors looking to exit in 2016 widely circulated. However, deal data from 2016 showed a higher level of confidence in the practices purchased and state of the industry than expected, with only a slight increase in activity, based on the following: 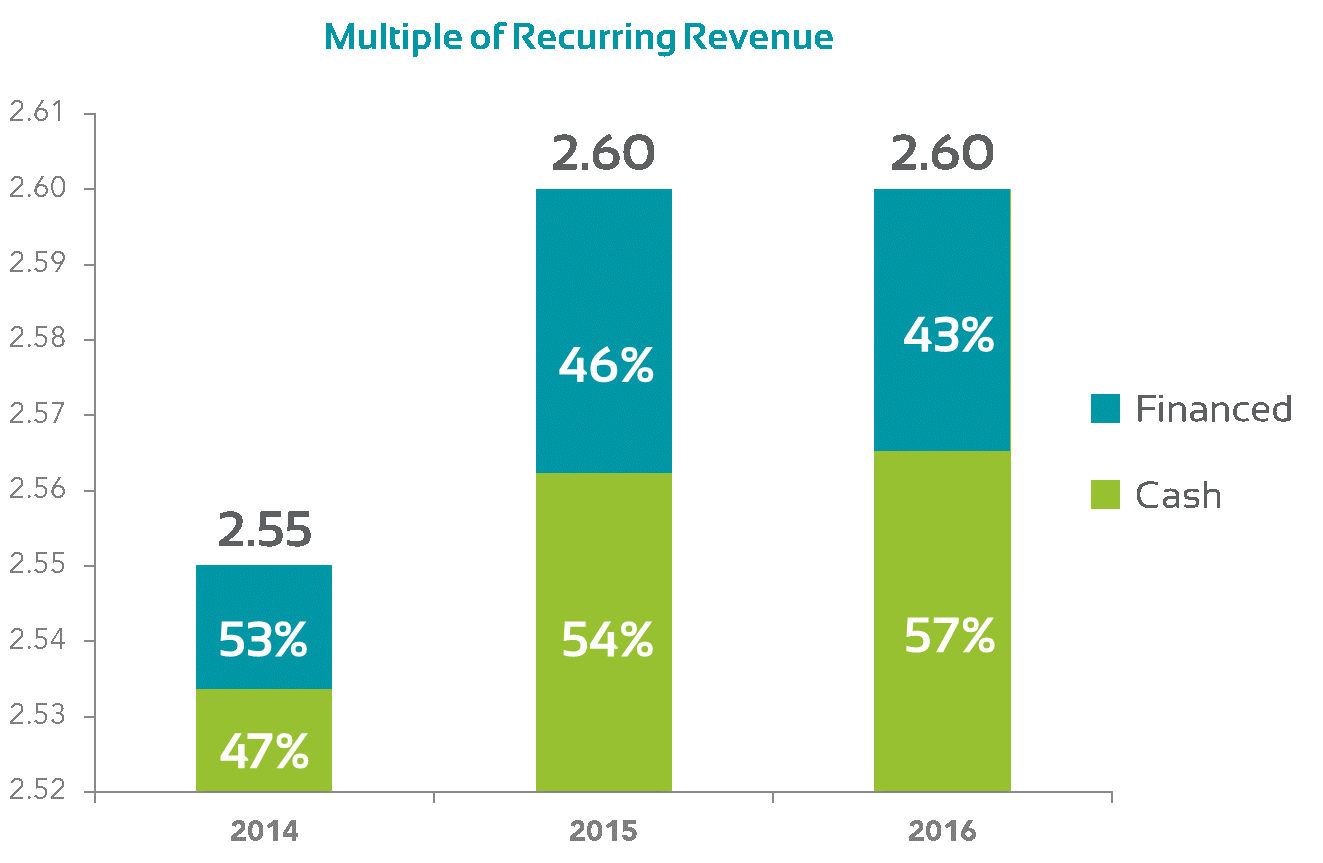 According to David Grau Jr., President of Succession Resource Group Inc., values will likely remain constant in 2017, which, he states, is actually indicative of a strengthening market. “Uncertainty remains for buyers and potential sellers regarding the changing regulatory environment and consolidation in the small broker-dealer space. There are many older advisors ‘on the fence’ about when to sell their practice. I expect many will decide to pull the trigger on selling this year,” Grau, Jr. said. “Fortunately, there is currently unmet demand for practices and more capable buyers, due in no small part to the availability of capital to buy practices. Look for a significant increase in the number of deals in 2017, with very few having to rely on seller financing.”

In late first quarter 2017, SRG will publish its first annual M&A Deal Book, providing the most interesting data from deals completed in 2016 for independent RIAs as well as independent registered representatives. The report will provide a detailed analysis of transactions and values from 2016, as well as a comparison to historical data providing buyers and sellers with information that has until now remained inaccessible to the masses.

What would happen to your business, your clients and the value of the company, if something where...